Jenny and William are qualified Wedding Celebrants, with a wealth of experience, writing and conducting ceremonies not only in the UAE but also Australia, Bali and the UK. They realise that each couples needs and desires are unique, therefore they will conduct in-depth research with the bride and groom to facilitate a bespoke, personal ceremony.

As well as the role of a Celebrant, William is also a Toastmaster. With excellent organisational and communication skills, he really can alleviate a lot of the stress out of the day. From getting family members together for photos, to announcing the cutting of the cake and first dance, he feels this really is an important and valuable role.  They offer individual celebrant and toast master services and can also work out a package for both services.

We are a family run business offering a professional, friendly and bespoke service for all weddings. 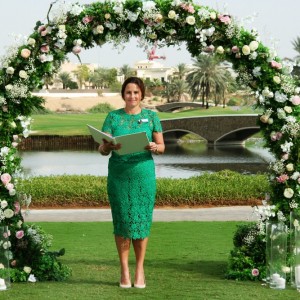 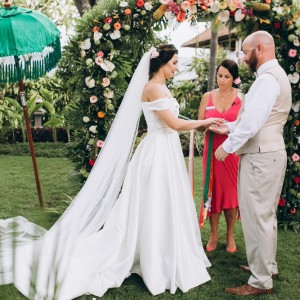 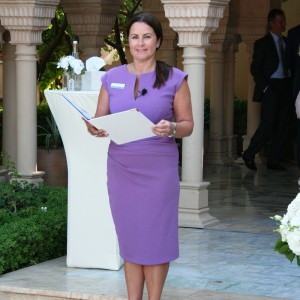 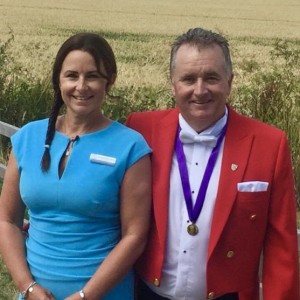 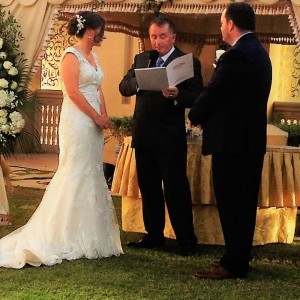 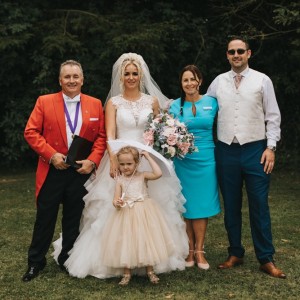 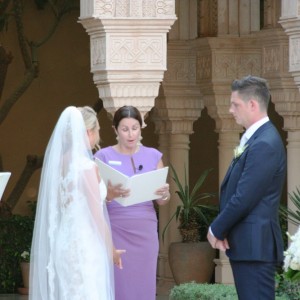 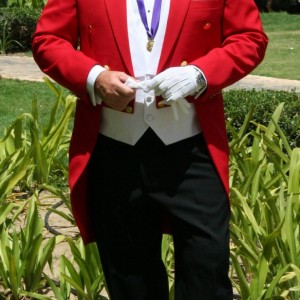 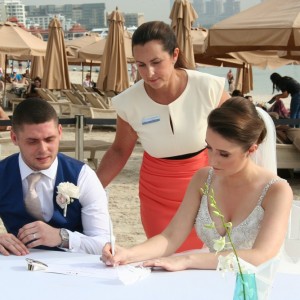 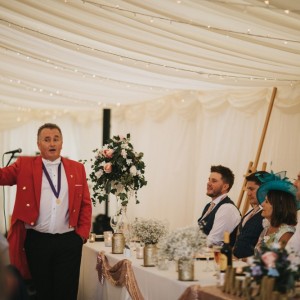 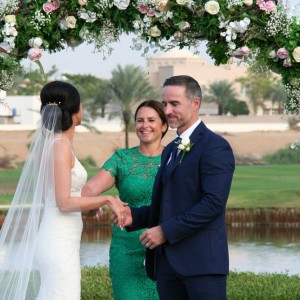 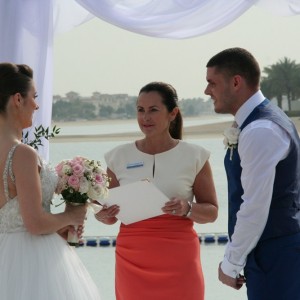 Reviews from their clients:

Myself and husband were looking for a wedding celebrant that would give our wedding a unique and special touch. Jenny was the first celebrant we reached out to and from the very first meeting, we knew we had made the correct choice.

Jenny made myself and Gerard feel comfortable and relaxed the whole time and reassured us that everything would be perfect, even with about 5 weeks till the ceremony date.

Jenny took us through the process they follow and how the ceremony would work and asked us personal questions about how we met, how Gerard proposed and any other personal stories we would like to share. To me this was great. We knew from these questions it was going to be personal.

After only a couple of days we received the first draft of our wedding ceremony. It was great!! I got teary eyed reading it. There was only minor changes that we had to make and things we added and removed with the help of Jenny. Jenny was also able to provide readings and poems that would be well suited to our ceremony.

Our wedding day came around so fast – the week building up to our wedding, as many brides will know was quite stressful but Jenny was in touch to reassure that I did not need to think about the ceremony everything was in hand and let me know that she would come to see me before the ceremony.

I was in the final stages of hair and make up when Jenny came to see me, she reassured me that the room was looking fantastic, the groom and grooms men were all there.

The best piece of advice Jenny gave me was to breath, enjoy the ceremony and take my time, this instantly made me cry (happy tears).

After the ceremony all our friends came to myself and Gerard and expressed how fantastic they thought the ceremony was. They said they had never been to a service before that was so personal and uplifting. This made our day. It was all we wanted to hear.

The ceremony set the tone for the rest of the day.

We cant thank Jenny enough for all the effort she put into writing and conducting our ceremony.

When my wife and I went in search of a celebrant to conduct our wedding ceremony, we were so fortunate to find Jenny on our first attempt.

First and foremost, Jenny is a wonderful, bubbly person with a heart of gold. From the moment we met her she filled us both with excitement and laughter. She was made to be a celebrant and we are so thankful we found her.

As far as the ceremony went, Jenny was instrumental in bringing calm to a somewhat challenging day, as we were faced with torrential rain and thunderstorms just prior to the beginning of the ceremony. The skies cleared, the sun came out and it was perfect. Jenny delivered such a beautiful ceremony for my wife and I, plus all our families and friends. She kept in constant contact with us, from the day we first met, up until the very hour of the ceremony and also provided us with some amazing photos, her husband William took. Jenny was articulate, engaging and she has such a wonderful personality, which was so suited to us.

Jenny, we can’t thank you enough for being utterly fantastic. You are an extremely endearing celebrant and we could not recommend your services highly enough. We can only hope other couples are lucky enough to find you, as we did.

Chris and I would like to thank Jenny for making our day so special.

From the first time we met Jenny we knew she would be the perfect person to hold out ceremony.

Jenny come to meet us at our wedding venue and really took the time to capture our love story. She put together a personal service for us including some of our “best bits” throughout our relationship.

Excellent communication even though we was on opposite sides of the world. Jenny really made us feel at ease. She even come to see me a few hours before the big moment which I thought was lovely.

Would 100% recommend Jenny and wish I could do it all over again.

‘A huge thank you to Jenny of AG Celebrants for really making our day so special. Her delivery and attention to detail was amazing, everything we had spoken about before the ceremony was presented in such a beautiful way, from detailed knowledge of how we met, to mentioning and thanking our special guests during the ceremony.
We were obviously nervous, as is everyone on their big day, but Jenny made us feel comfortable and very much at ease throughout the ceremony.
Jenny, you truly were the icing on the cake on our very special day, thank you so much for everything you did for us –
with love, Courtney and Jamie Parker x’

We first met Jenny on a skype call as we were due to fly into Dubai the following week for our wedding ceremony.
She put us at ease immediately, as we were a little worried about running out of time and was unsure if we would get the ceremony we really wanted.
After taking down some details, looking at both our Facebook and Instagram profiles and a brief history of how we met, Jenny went away and wrote the most beautiful and fitting ceremony for us both. A difficult task as she only had a few days and not that much information.
Jenny kept us informed daily and arrived in plenty of time at our hotel the following week. We were able to chat and talk about the handfasting ceremony that we had chosen to perform and find out a little more about each other.
Both my husband and I felt relieved to have had Jenny perform our ceremony on this special day and she even managed to download our favourite song on her phone as I walked down to meet my husband. I would highly recommend Jenny to write and perform your special ceremony, whatever the occasion.
We are now back in the States and hope if she ever travels this way, she’ll call in and say hello. Thank you Jenny. You were wonderful, all we could have asked for and more. xx

From our first meeting with Jenny we knew that she was the perfect person to conduct our wedding ceremony. We were aware how important her role would be in setting the tone for the rest of the day, helping to steady our nerves and to make our guests feel welcome.
Jenny is warm, emotionally intelligent and wonderfully organised. She took time to learn about us as a couple, to get to know us as individuals and wrote the most beautiful ceremony which captured all of stories in a way which was engaging, well scripted, and included all of our guests.
One of the things which impressed me the most about Jenny is how proactive she is. In the final few weeks where organising a wedding gets slightly frantic, Jenny took all the pressure off us regarding the ceremony, by organising meetings with the venue, asking the questions which we hadn’t even thought about and introducing us to her lovely husband William who very kindly assisted with all of the sound checks and was on hand on the day to make sure everything ran smoothly.
Both Jenny and William are complete professionals, well presented and immaculately flawless and we feel so honoured that they were such a big part of our day.”
Review from Jo and Sean
Wedding Date 1st November 2018
Venue One and Only , The Palm, Dubai

Well the big day was only a day away. Jenny and Will, her husband, were introduced to me, for the rehearsal. Will was to be the Master of Ceremonies.

They made you feel relaxed and secure in the fact that the day will go without a hitch. Jenny was very lovely and gracious, whilst Will was very attentive to get the list of things that my daughter needed him to do. He was asking questions and making sure he understood everything that she wanted to make the day run smooth.

The morning of the big day, Jenny and Will came early, so as to get things prepared. One last run through with my daughter and Will was off with clip board under arm.

I must say they both turned out dressed impeccably. The Master of Ceremonies was dressed in a very traditional red jacket, black trousers and white shirt, he looked the part. Jenny was dressed beautifully and respected the fact that they both would be captured on video at some point.

The Master of Ceremonies (Will) never faulted, he was running around making sure everything was going to plan, he was on it all day . Getting people sat down in the correct places, making sure the wine was chilled, making sure the birds of prey guy was happy. There wasn’t anything that he missed. At the reception, he was there again announcing the bride and groom, and introducing the speakers as they took their part to make the speeches’, you could not fault him, highly recommend him.

Jenny was there at the altar to marry the two newlyweds. She spoke clearly and not rushed. She just didn’t go into the ceremony straight away, she explained to everyone what the tying of the knot was and where it came from, so no one was thinking , so what just happened ?. It was a beautiful ceremony, the tying of the knot, otherwise known as Hand Fasting, was great. I highly recommend this ceremony done with Jenny. Everyone was happy in the fact they knew what was happening, because to a lot of the guests, they hadn’t heard of this before ,so was interested in everything that happened .

It is not a long ceremony, but very worthwhile.

If I was to give Jenny and Will a star out of 5, I would give them a 6 . I cannot thank them enough for what they did on the day.

It was a beautiful day without doubt.

Thank you so much

Jenny and William brought a warmth and understanding of what we wanted to make our day perfect. They came to Bali for our ceremony and with their friendly and professional enthusiasm made our day complete and gave us the best memories that will last forever.

AG Celebrants provided an approach that helped reduce the stress of everything going on and were full of great ideas to help support us building up to our wonderful day.