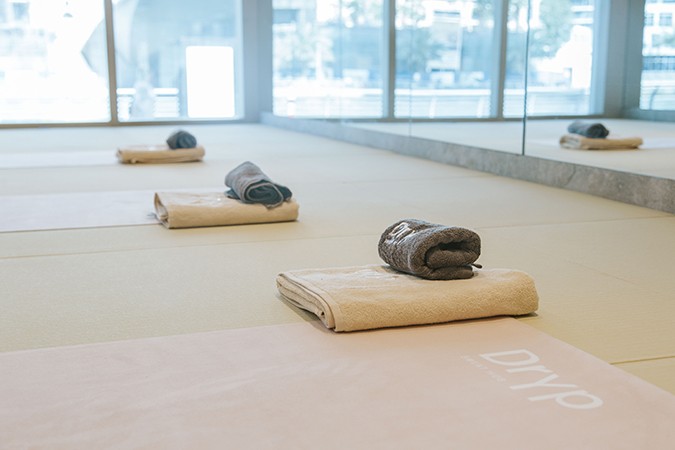 It may seem counter-intuitive to visit a hot yoga studio during Dubai’s already far-too-hot summer months, but bear with us! DRYP is one of the newest (and hottest) Yoga spots in Dubai Marina, so our Assistant Editor Rachael went along to try out a class, from the point of view of a bride-to-be who wants to get fit for her wedding in a calm, relaxing environment. 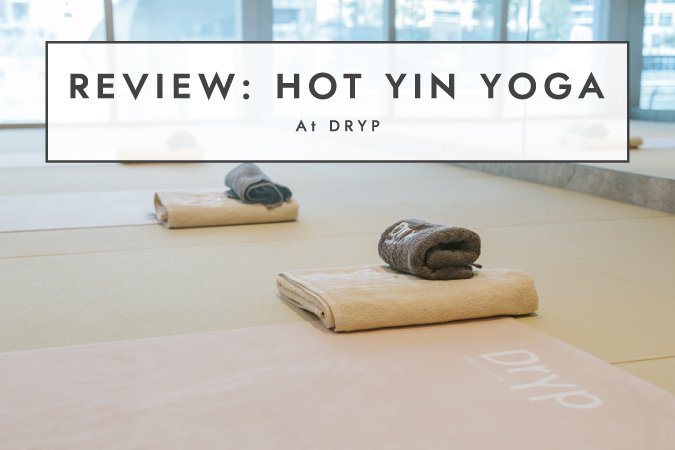 My invitation to try a class at DRYP came at just the right time. I was nearing the end of my ultramarathon training and was looking for a way to stretch and soothe my tight, overworked muscles before the big event. With this in mind, I opted to try a Hot Yin Yoga class. The class description on DRYP’s website said:

Moreover, DRYP uses infrared heat technology to warm up your body (rather than the room), and therefore classes remain at a more consistent temperature. Hot yoga can help the body and mind in so many ways, such as helping to detoxify, aiding weight loss, boosting your immune system and helping you to become more flexible thanks to increased blood flow to your limbs.

Now I live pretty far from Dubai Marina, so I had to leave super early for my 7:30 class in order to make sure I got there on time. Thankfully, DRYP is well located within the Marina in an area that doesn’t have really bad traffic. My taxi driver found the building easily, and I then walked through this building and took the lift down to the Marina Promenade level (thankfully, I followed another class-goer!) until I found myself at the water’s edge, with DRYP right in front of me. As I took a taxi, I can’t comment on the parking situation, but if you happen to live in the Marina then it is perfect. Once inside the studio’s reception area, I was amazed at just how busy it was. A class had just finished, and the sweaty people around me, who were sat recovering and sipping water, made me realise that this was not going to be your average Yin class.

I checked in, discovering that I had completely forgotten to bring water with me. Thankfully, I was able to purchase some, and I also noticed that a water cooler was available for those who had brought their own bottles to top up with. Mats were also available to rent for those who did not have their own.

After putting my stuff in a locker in the changing rooms, I entered the studio. The heat was deceptive. At first, I didn’t think it was too bad, but after a couple of minutes of relaxing whilst waiting for the class to start, it became clear that I was wrong!

As it was an evening class, the room was completely dark and decorated with electric candles. A large mirror covers one wall, and I couldn’t help but chuckle to myself as I looked out of the tinted windows to see a brightly illuminated boat pass by on the waters of the Marina. The floor was soft, which I really appreciated, as it made some of the poses a lot easier on the knees. The class was also incredibly busy – perhaps too busy – and I did have a few embarrassing moments with my neighbours when we accidentally brushed each other’s hands and feet during the session.

Our instructor started by telling us that we would be focusing on opening the hips, which I was really happy about! We would be holding a number of poses for an extended amount of time, using breathing to help us sink deeper and deeper into each pose.

A warm-up section followed, which included the familiar cat and cow pose before we went to stretch our feet. It was then that I realised how hard the class was going to be – in a good way of course! In this simple pose, kneeling with my toes on the mat behind me, we were encouraged to lean back, bit by bit. My feet had suffered during training and were super tight, so I really struggled with this. However, I could feel the tightness dissipating with every minute that passed by.

We then began a series of poses that focused on releasing tension in the hips. Unlike some classes, we were encouraged to make noises and release tension verbally, which I thought was a great idea! Some cultures believe that the hips are key to our emotions, and when we release them, our emotions come flooding out too. I have to admit, as silly as it may sound now, I did feel incredibly emotional during the class.

As we moved through the poses, I could feel my muscles relaxing and my mind quietening down. Some of the positions were uncomfortable and all my thoughts were focused on getting through, rather than wondering what to have for dinner or thinking about work. Everyone in the class was at different levels, which was reassuring, and we finished with a nice relaxation session, during which I heard a couple of people snoring!

DRYP is a lovely studio which is perfect for lovers of hot yoga and brides-to-be who want to add a new dimension to their pre-wedding fitness regime. I would be really keen to try some of the other classes to compare them to the Yin Yoga.

The studio is well decorated in peach tones and is especially convenient for those in Dubai Marina. It is located close to where I used to live, and I would certainly attend regularly if I still lived there! Showers and changing facilities are also available. If you’re rushing straight home, as I was, I would definitely recommend bringing something warm to wear. As I walked through the Marina that evening, I actually felt cold!

You can find out more about DRYP by visiting their website here. Classes are priced at 85 AED per class, but money-saving packages are available. To get in touch, call 04 220 5330 or follow them on Facebook and Instagram.