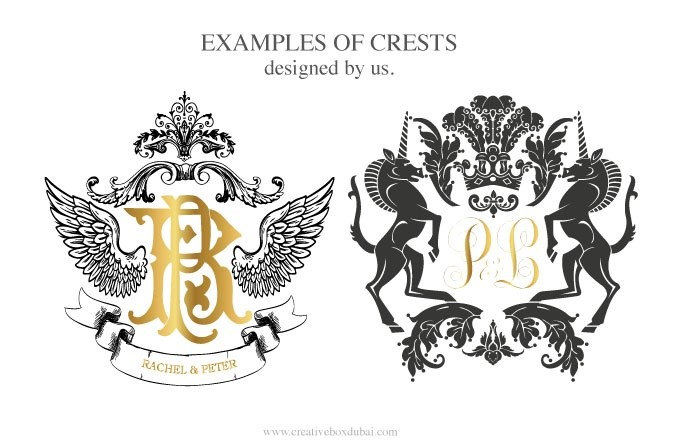 As well as designing beautiful wedding stationery, our talented vendors Creative Box Designs also  create personal crests for couples wishing to add something unique to their special day. But what is a crest (also known as a coat of arms), and why should you think about getting one designed? Below, Ritu from Creative Box shares with us a selection of crests that her company has previously designed, and lets us know all about their meaning, as well as telling us how they can be used at your wedding…enjoy!

Crests were traditionally held by one individual within the family and would be passed on to their heir. The symbols and the insignia would be created to refer to the owner’s life, family and achievements. It was like a family’s own personal seal.

The crest can be incorporated into individual elements of the wedding, such as on favours and menus, as well as providing a focal point. By putting together traditional symbols and modern elements chosen carefully in conjunction with the couple, an exclusive crest can be created that can then be used throughout the couple’s life. There is perhaps no better opportunity to create a crest than when you are designing your custom made wedding invitations, as it is a perfect chance to start a new tradition whilst embarking on your journey together.

Elements of a Crest

A crest has many components, and by adapting each part, the differences can be striking. ♡ Mantling This unique design part of the crest can feature elements related to your wedding venue. ♡ Initials in the Shield By creating a custom made monogram of you and your fiancé’s initials, you can create an eye catching focal point within the crest. ♡ Family name Placing the names of the couple within the crest means that the union of both families is formally represented. ♡ Supporters Traditionally, the crest or coat of arms has animals or birds on either side. This is the perfect opportunity to incorporate your favourite animal, or, if you met in the UAE, to feature an indigenous creature from the region. Have a look at the images below to see how the different elements have been adapted in order to create unique crests for each couple. Are you looking for a designer for all your wedding stationery needs? Check out the Creative Box vendor club profile here.