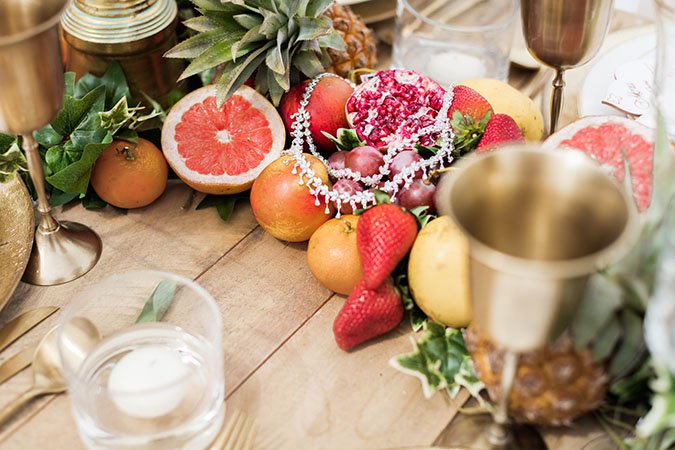 When dreaming of traditional Middle Eastern imagery, one tends to think of opulent, rich colours, palatial venues and exotic fruits. Today’s styled shoot incorporates all of these things and more besides. Encre d’Or are event designers and planners based in Aix-en-Provence, France. No stranger to destination weddings, they chose Dubai as the location of their latest styled shoot. 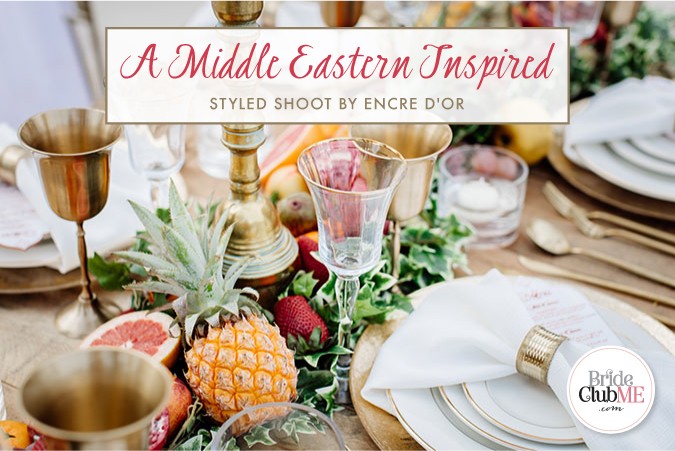 Whilst it is possible to have any type or theme of wedding in Dubai, as the real weddings featured on BCME demonstrate, this vivid styled shoot is the perfect inspiration for couples planning a wedding that gives a nod to their home abroad; the UAE. Read on to discover more about this sumptuous shoot at the One & Only Royal Mirage from Encre d’Or’s Justine and Jessica. Enjoy! 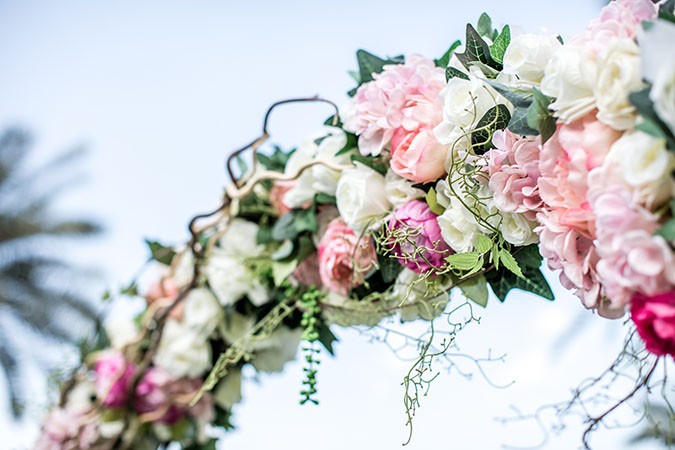 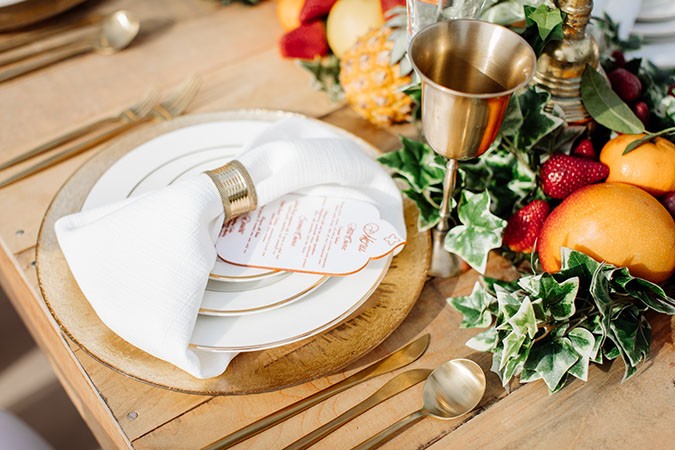 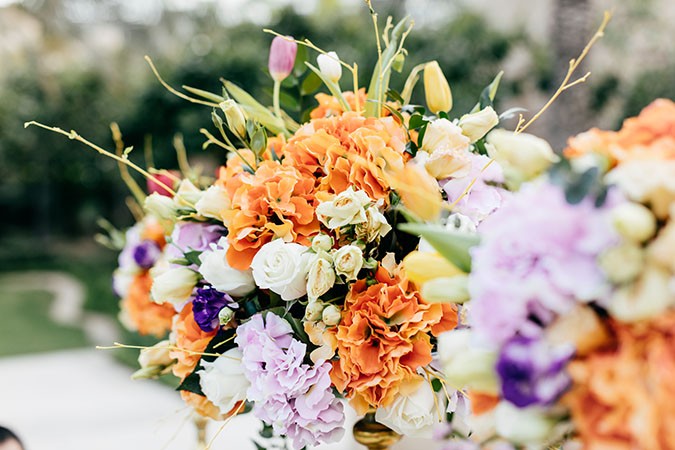 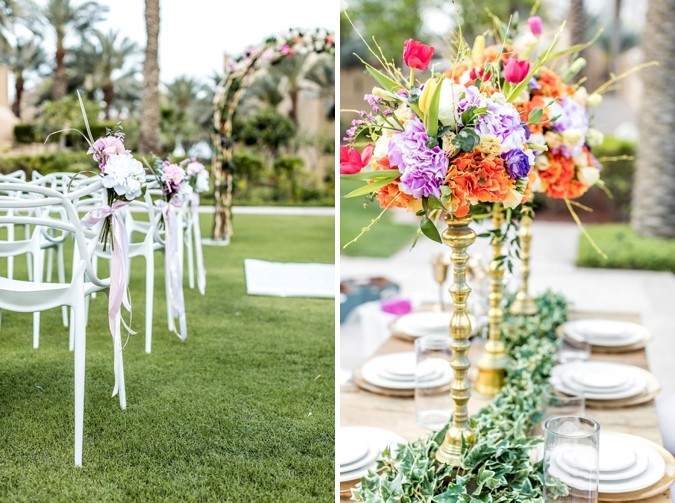 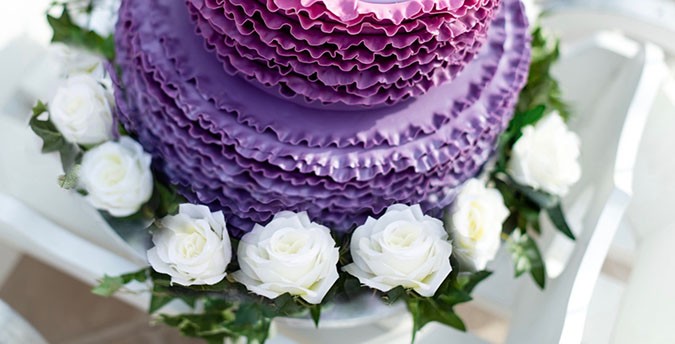 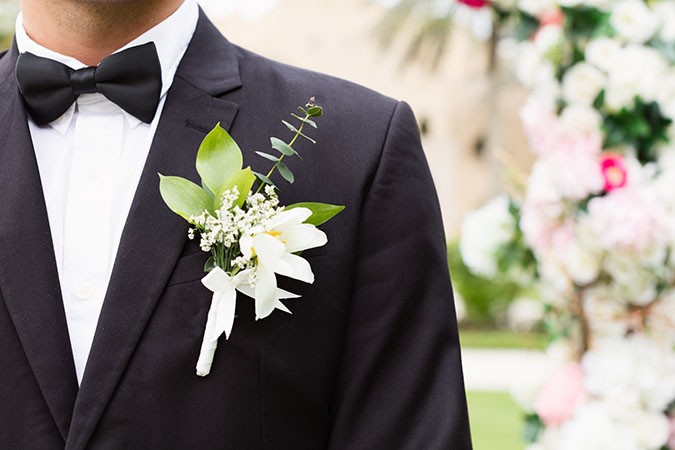 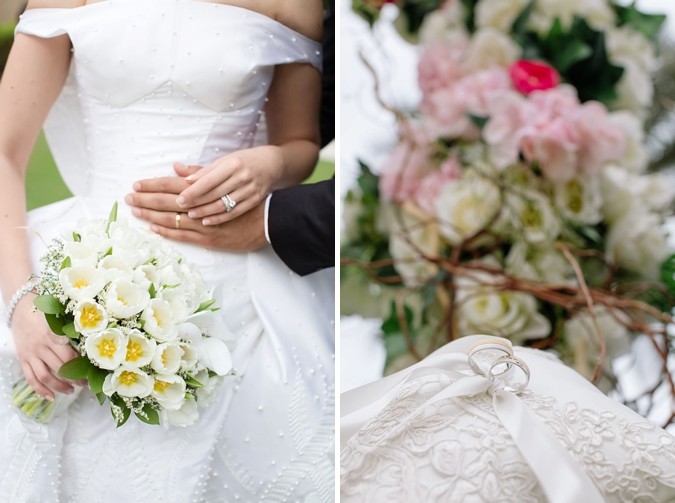 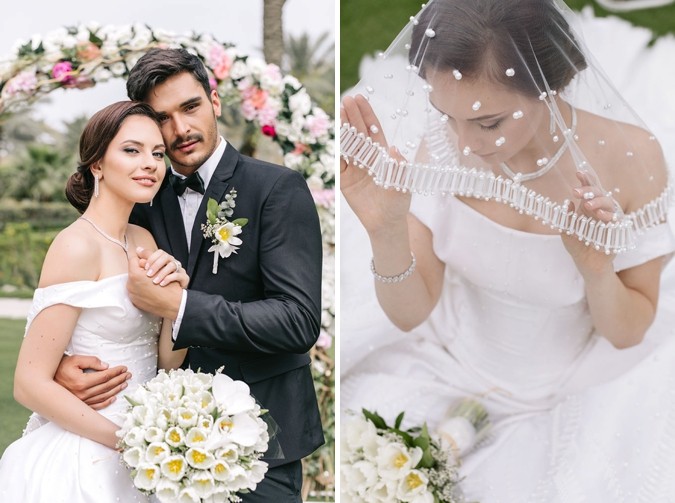 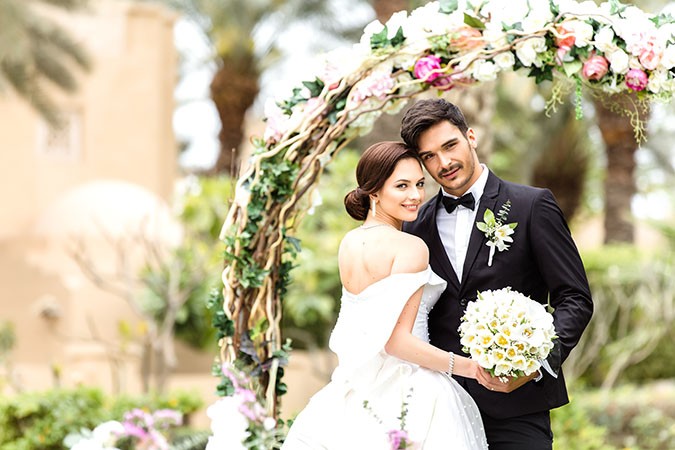 A Note From The Wedding Planners 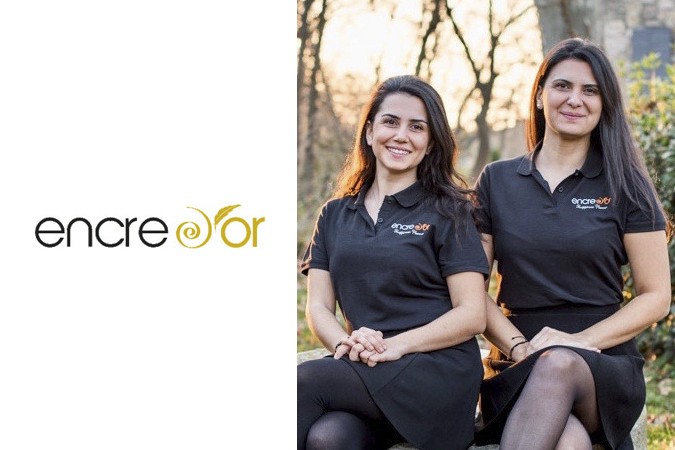 Above: Justine and Jessica from Encre d’Or

Mixing European modernism and oriental culture, Dubai was the destination for our inspirational photo shoot at the majestic One & Only Royal Mirage. On the border of the Gulf Sea, mixed between breath-taking views and a magical set up that reflects both cultures, we spiced things up by adding juicy fruits and colourful flowers for the summer season.

The inspiration behind our shoot was a Middle Eastern Royal Family festivity. To achieve this, we used warm, mind blowing and strong colours such as Red, Orange, Yellow, White, and Purple. We mixed flowers and fruits and added a touch of gold to represent the region on the table scape. We also added a touch of European culture to represent our origins. All of these elements were connected and represented exactly what we had in mind. 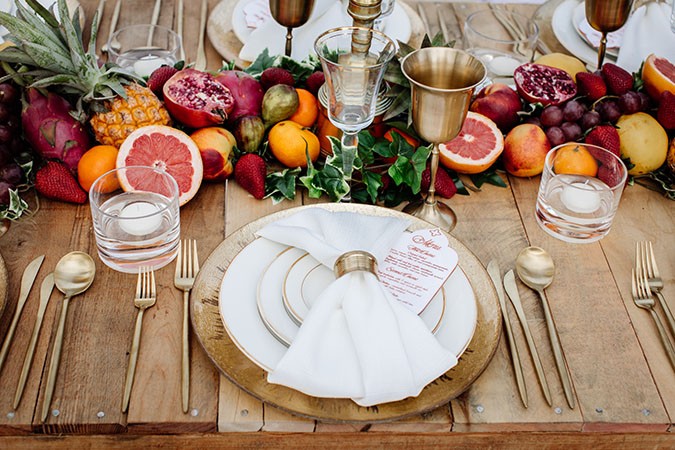 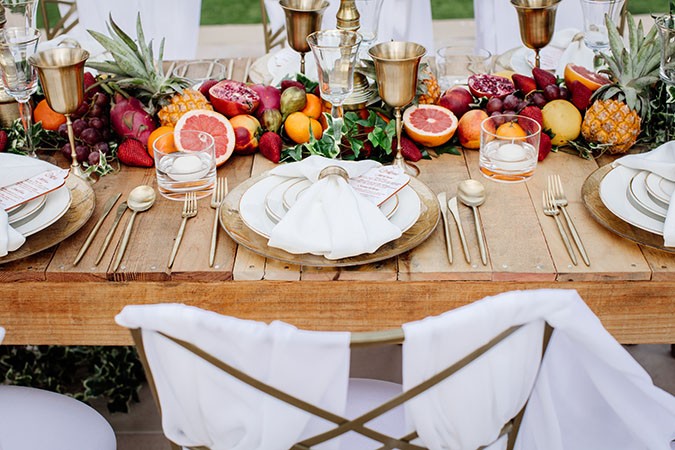 Our styled wooden table, decorated with beautiful runners, was enhanced by flowers and spiced up with fresh fruits all around the table surrounded by original golden plates and cutlery. We kept the colour tones in harmony between all the elements (the stationery, the flowers, the fruits, the cake…) 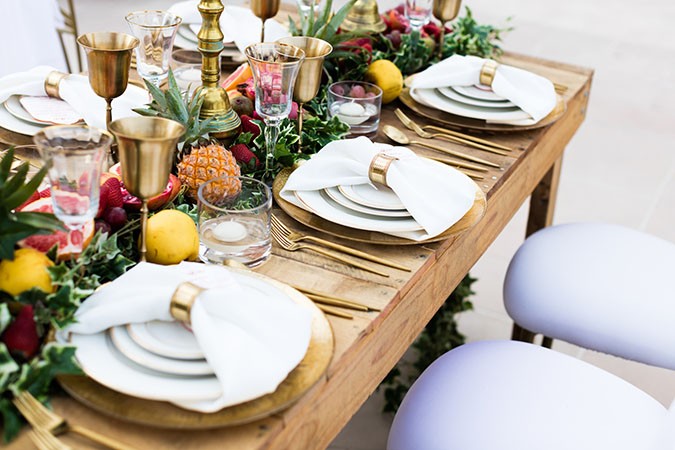 Golden chandeliers and beautiful flowers acted as centrepieces in different sizes to give some perspective. The golden chairs were draped with elegant off-white material and further modern and rustic decorations were placed on the table.

The menu was built based on the theme of the styled shoot; a touch of orange and gold with an Arabic design on an original acrylic support.

We designed a special wedding cake with the same colour tones to fit in a baby white carriage which was decorated with fresh flowers. 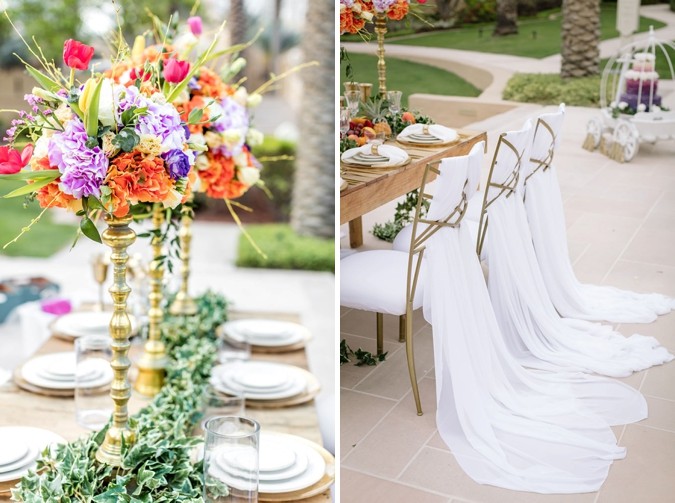 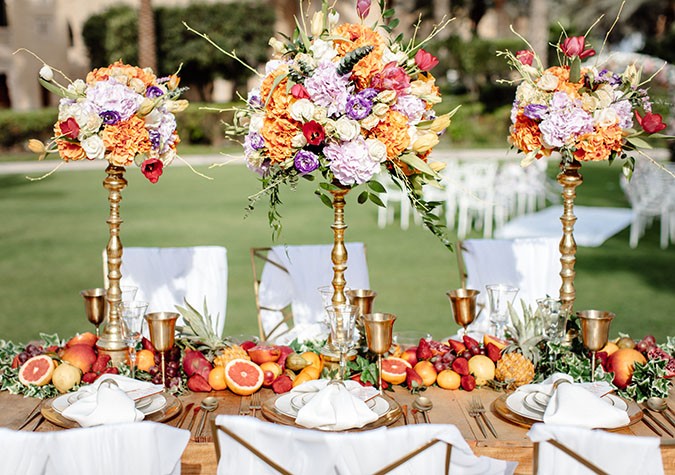 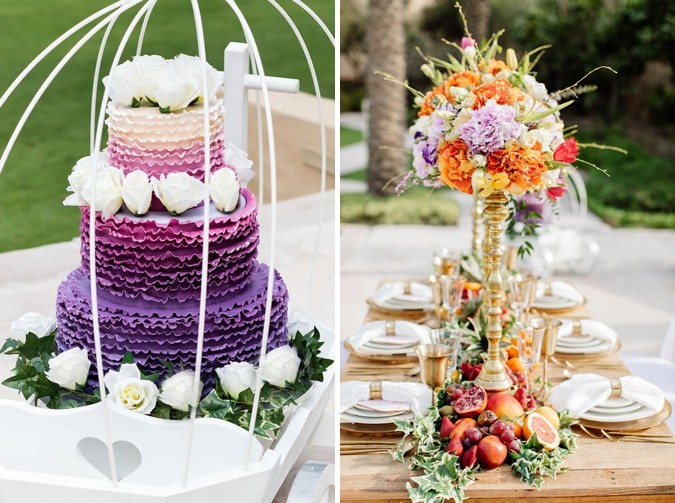 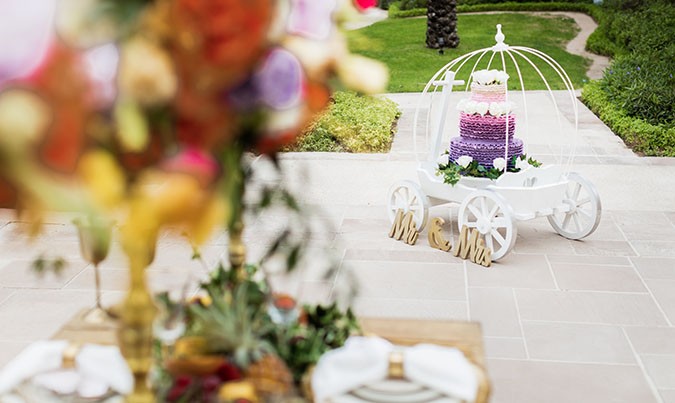 Our model Bride was dressed in a hand-made fluffy gown and pearls. Nude makeup and a natural hairstyle gave some elegance to this colourful decor. In addition, the Bride’s set of diamonds gave a touch of sophistication and was a nod to the nobility of the region we chose for our styled shoot. 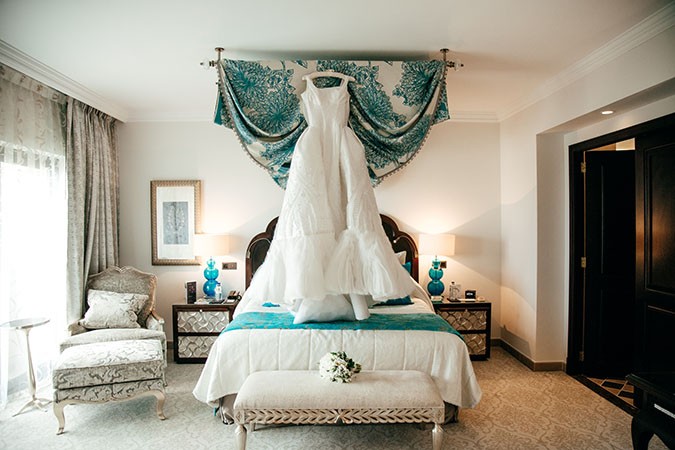 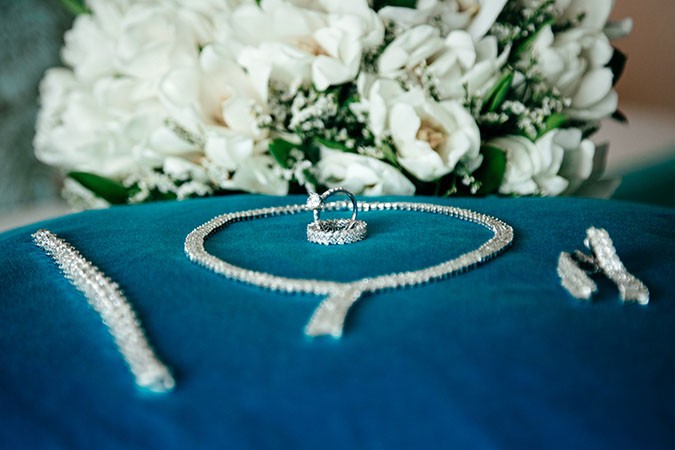 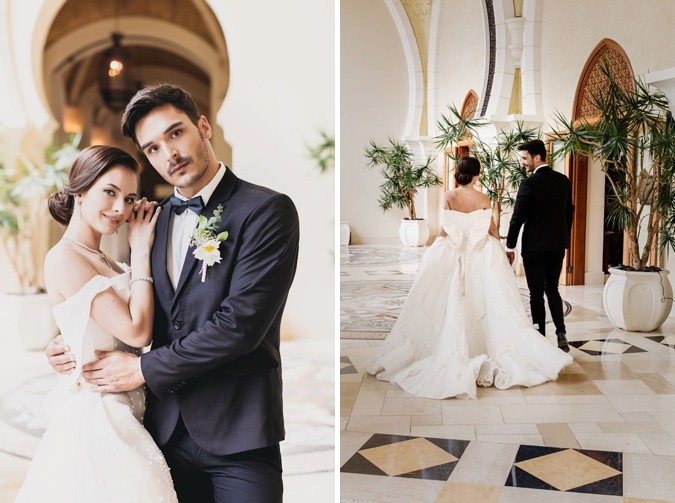 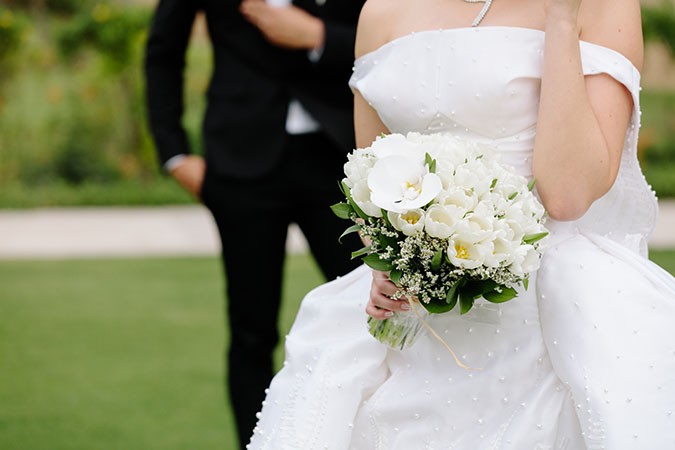 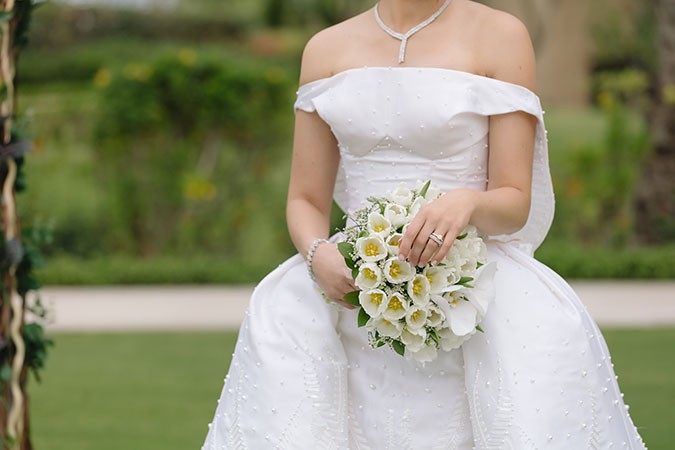