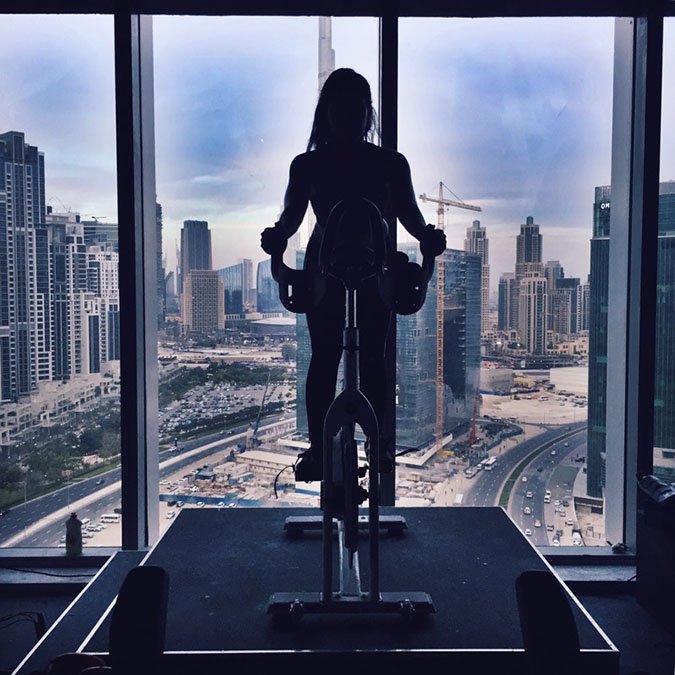 Written by on August 21, 2017.
Tagged under: fitness for brides to be, indoor cycling, review: motion cycling dubai

If you’re currently busy preparing for your wedding day, indoor cycling can offer some incredible benefits, both physically and mentally. With so many options available in Dubai, it can be hard to choose a class that suits you and your needs. Motion Cycling, which is based in Business Bay, promises that one of its 45-minute sessions will burn between 600 and 800 calories. Moreover, its concept is pretty unique. Bride Club ME’s Assistant Editor Rachael went along to find out what it was all about, from the point of view of a bride-to-be. 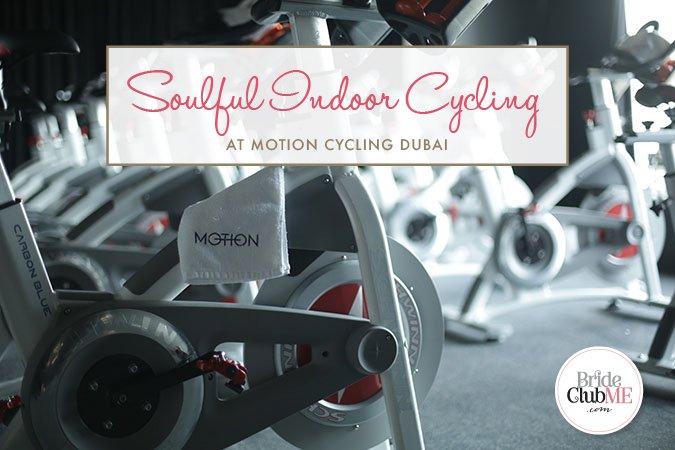 I should probably start by saying that I am not the kind of person who is keen on indoor cycling. Whilst I love hopping on my bike and zipping around Al Qudra, there’s something about indoor cycling that’s kind of…scary. But something about Motion’s concept kind of lured me in, and I was intrigued enough to want to give it a go.

For a start, Motion gives less emphasis to the competitive side of indoor cycling, and instead focuses on being designed to “inspire, motivate and raise your soul while giving you a full-body workout”. Classes take place in a darkened room lit only by candles and the music is carefully selected to take you through a range of emotions and moods.

Motion was co-founded by Amelie Hua, who like me did not consider herself to be the biggest fan of indoor cycling. Back home in her native Paris last summer, a friend persuaded her to take part in the popular Soul Cycle class, and she was hooked. 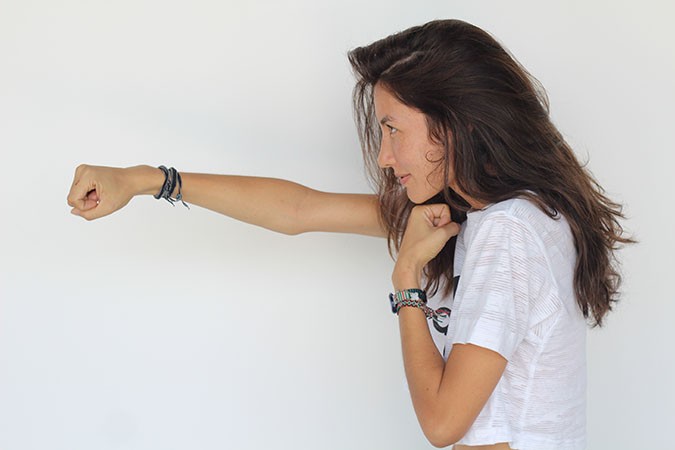 Above: Amelie Hua of Motion Cycling.

Each 45-minute session begins with a warm-up before a thirty-minute blast of high-intensity cardio. Participants are then tested even further during the Arms and Abs section before enjoying a cool down and stretch. Motion prides itself on being inspirational rather than confrontational, with motivational instructors whose energy encourages you to perform your best.

Located on the eighteenth floor of the Oberoi in Business Bay, Motion offers incredible views of downtown and the Burj Khalifa. Attending a class in the evening means that you get that incredible shifting of the light as night falls and buildings begin to twinkle. There’s certainly an air of magic before the class begins! 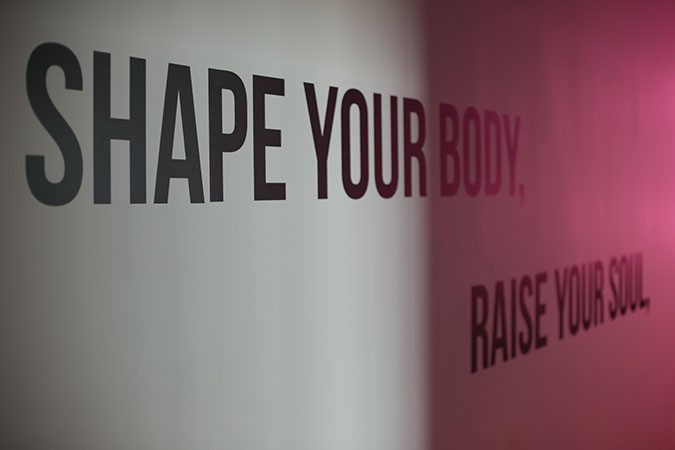 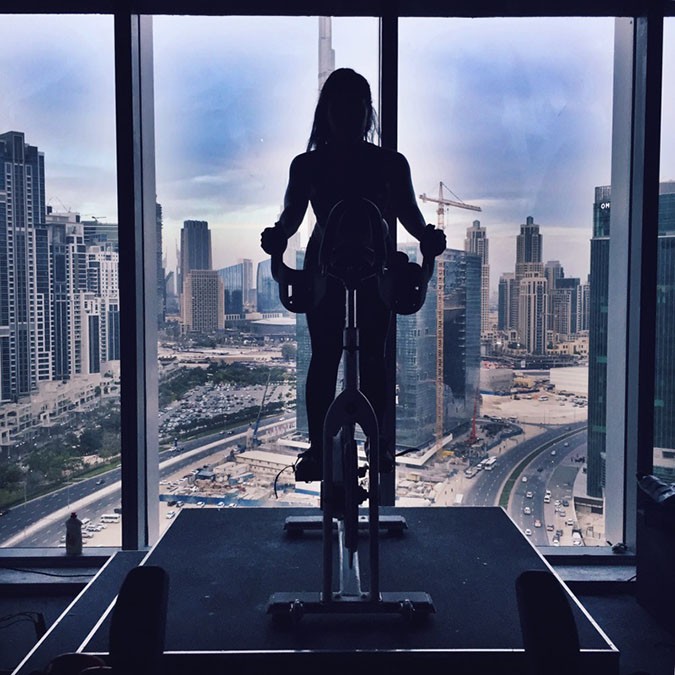 The studio is inviting with large changing rooms. Positive affirmations adorn the walls and the vibe is stylish, urban and energetic. Spacious showers are provided (you will need them!) and toiletries are provided as well. 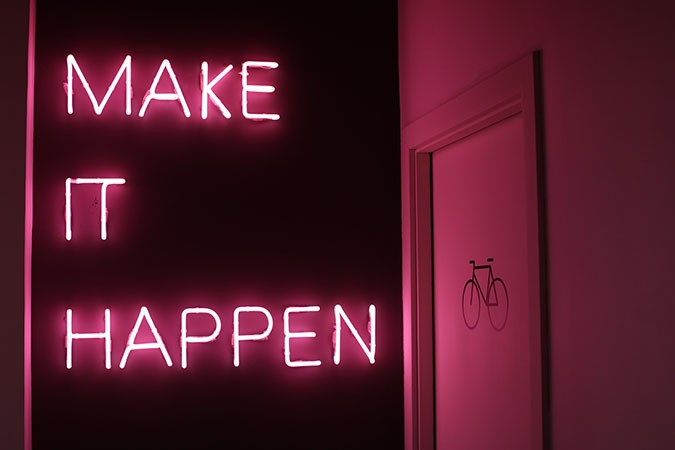 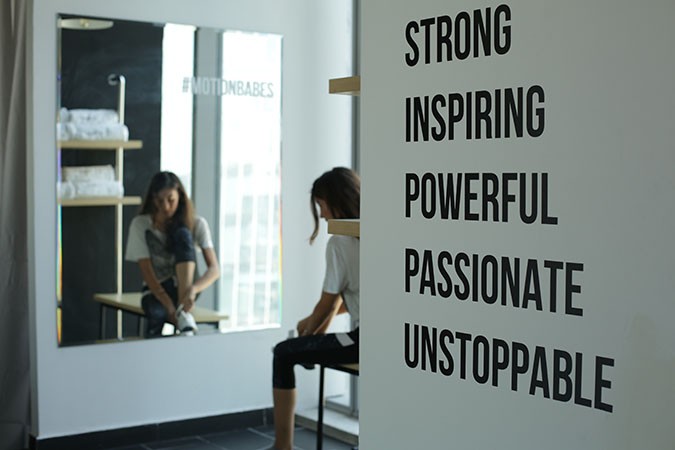 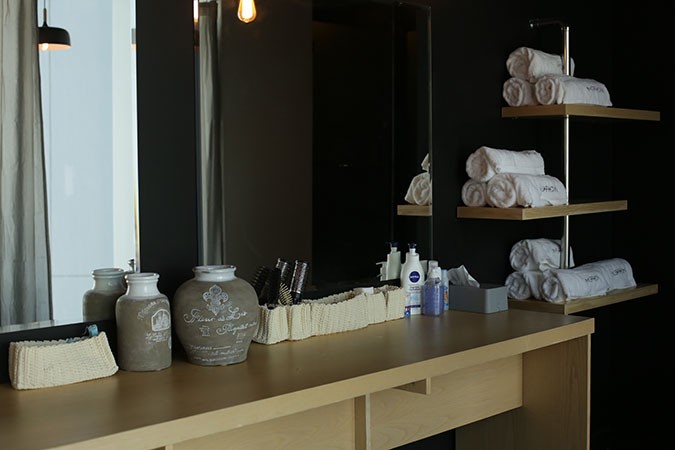 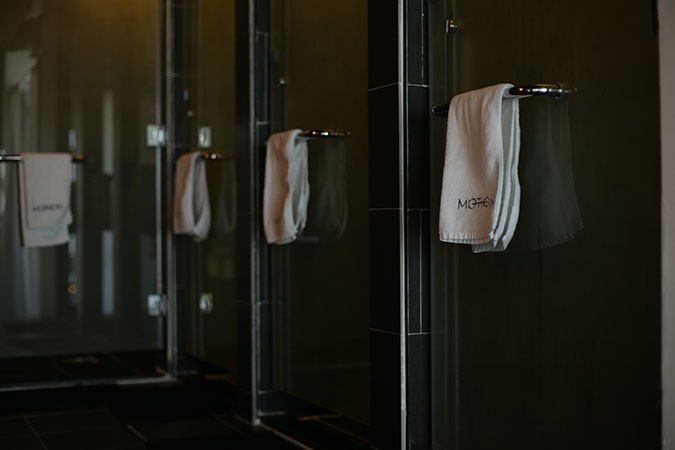 Each time a newcomer attends a class, their Polaroid is taken and they are then hung on the wall of the soon to be lounge area and concept store.

The cycling studio itself is spacious and houses 15 stationary bikes. Since the studio only opened in March 2017, it’s super clean and tidy. 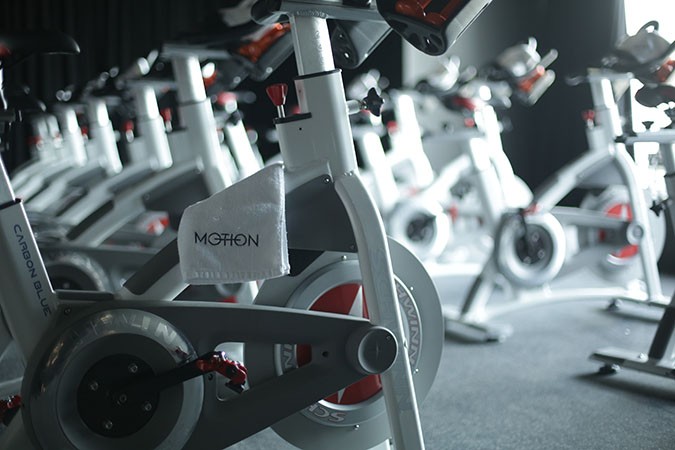 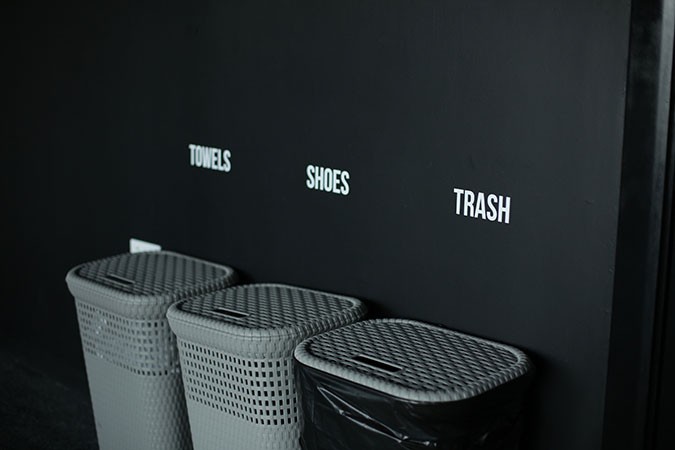 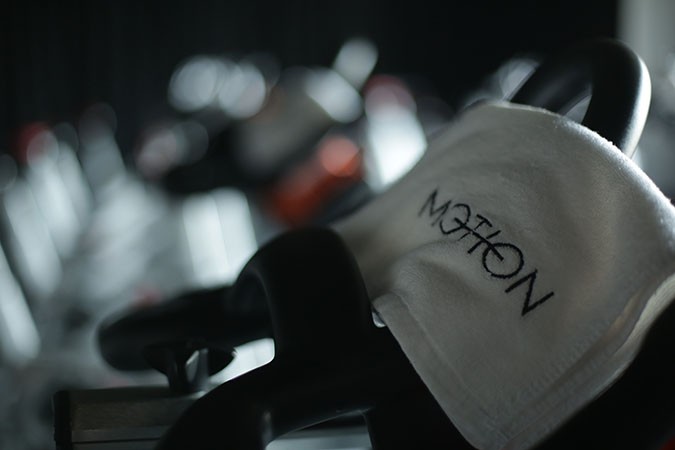 After registering for the class, I spent some time looking around the studio (and out of the window at the stunning view) before changing into my cycling shoes. There was a locker in the changing rooms in which I could place my trainers. The shoes were in great condition (no smelly remnants of hundreds of other pairs of feet!) and easily clipped into the pedals of the bike, meaning that it was now fully up to me to get the most out of the extra power that comes with being attached to your bike. 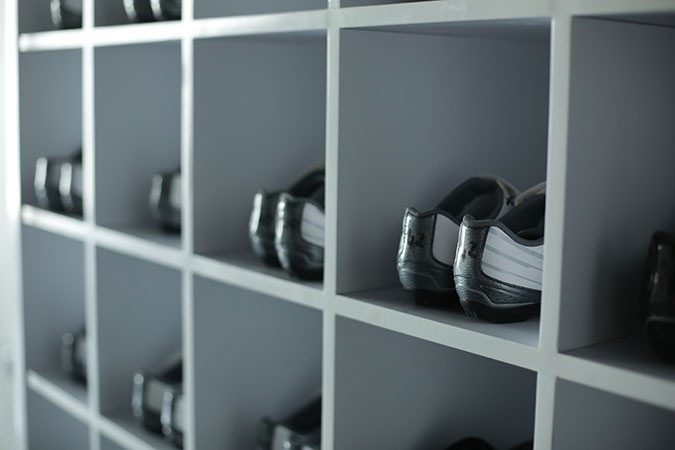 As the class started, the instructor, Ivana, got us to think about our intention for the class. This evening, the intention would be to do with music and how it had the power to influence how we feel. I could tell that Ivana was going to be a great instructor just by looking at her. She commanded the room with her enthusiasm and also had the kind of body that I dream of achieving. If that’s what indoor cycling can do, sign me up now! 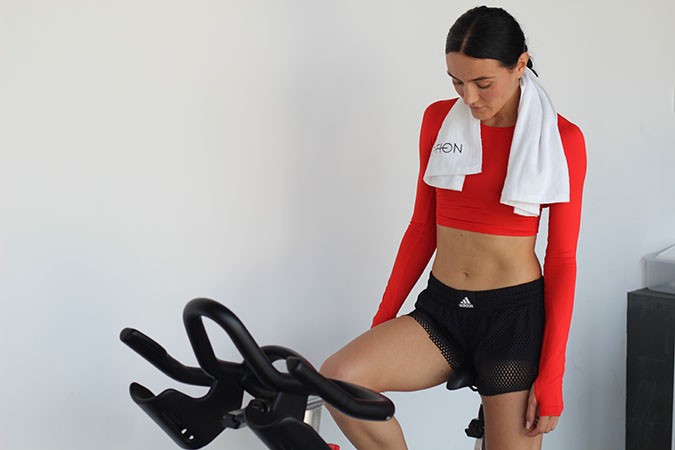 We began with a ‘warm up’ which was the kind of warm up that feels like the actual workout. We were already out of the saddle, resistance up as we powered along to a pumping tune.

It wasn’t long before the sweat started to cascade down my face (and pretty much everywhere else). Thankfully, a towel was thoughtfully provided on the handlebars of the bike, alongside some water, which was greatly appreciated.

It was then that I realised another difference between Motion and other indoor cycling studios. The routine is almost choreographed, with various elements of upper body work, such as tricep dips and push-ups using the handlebars, hands in different positions for each move. I personally found this part of the class very tricky, as my legs tried to keep to the rhythm of the music whilst I struggled to perform the upper body exercises at what felt like lightening speed. However, it was great fun (and super hard work) and I’m sure that with practice I could definitely improve my coordination.

I was pleased to hear other people around me struggling, as it meant that it wasn’t just me who at this point was seriously feeling the burn. Still, the energy in the room remained high and Ivana continued to motivate us. Despite the hard work, I seriously didn’t want to give up! 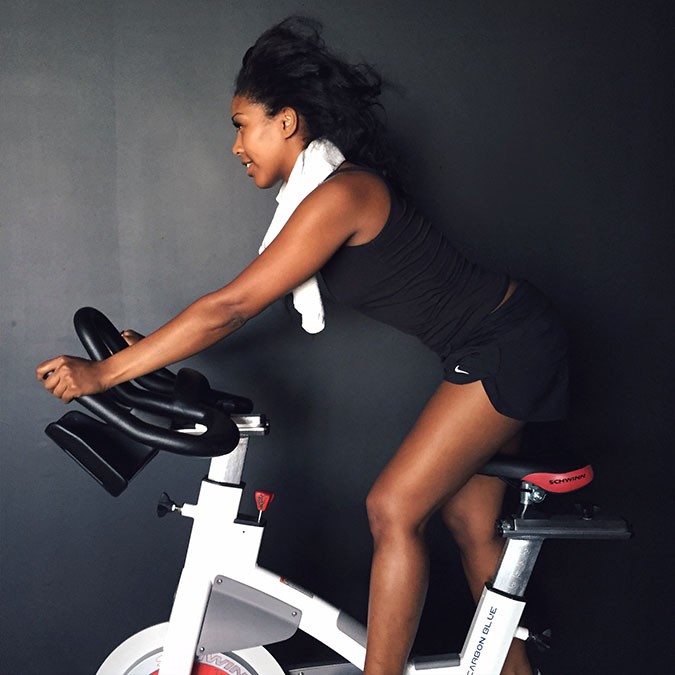 We then made use of the deceptively light dumbbells that had also been placed on the handlebars of the bike. Using the concept of light weights but a high number of repetitions, the arm workout section of the class was seriously hard work. I held on throughout the exercises for as long as I could, legs continuing to pedal, before I had to put my arms down for a rest, just for a couple of seconds. Thankfully, I realised that I was not alone in doing this.

The next part of the class was my favourite, and not because it was the easiest. The music slowed down, and Ivana asked us to close our eyes. We pedalled to the beat, alone in our thoughts. I don’t recall the exact song, but it was some kind of remix of an Ed Sheeran song that I had never heard before. Listening to the lyrics and pedalling along, I suddenly began to feel quite emotional, but in a really positive way. I felt proud of myself for working hard, and I started thinking about all the other things in life that I didn’t give myself credit for. All too often, we are plagued by our own self-doubt and the feeling that we are not good enough. During this song, I felt encouraged by my own progress both during the class and in my personal life.

One more song remained, and it was another high-energy, intense blast. Knowing that it was the last song made a big difference, and I gave it one last push. We finished with a cool down and stretch.

Making my way to the changing rooms, I realised that I was an absolute mess. My hair was drenched in sweat and basically a matted knot; my face was bright red; I’m pretty sure I didn’t smell particularly fragrant. Thank goodness for showers and toiletries!

Motion Cycling offers a unique form of indoor cycling that can be utilised in different ways by Dubai based brides-to-be. Firstly, since we all like to feel our best before our wedding, it would be a great way to get in shape prior to the big day. Due to the emphasis on the mind as well as the body, regular classes at Motion would be a great stress buster as the wedding approaches. I also think it would be fantastic as part of a Hen Do, perhaps before dinner and a night out, or as something for your guests to enjoy when they arrive in Dubai for your wedding. Afterall, there’s nothing like some intensive exercise to beat jet lag and revive oneself after a long flight, plus they’ll have fantastic views of the Dubai skyline as well!

The following day, I could definitely feel the effects of the workout, both in my legs and in my arms and shoulders. This proved to me that I had worked hard and received a full-body workout. 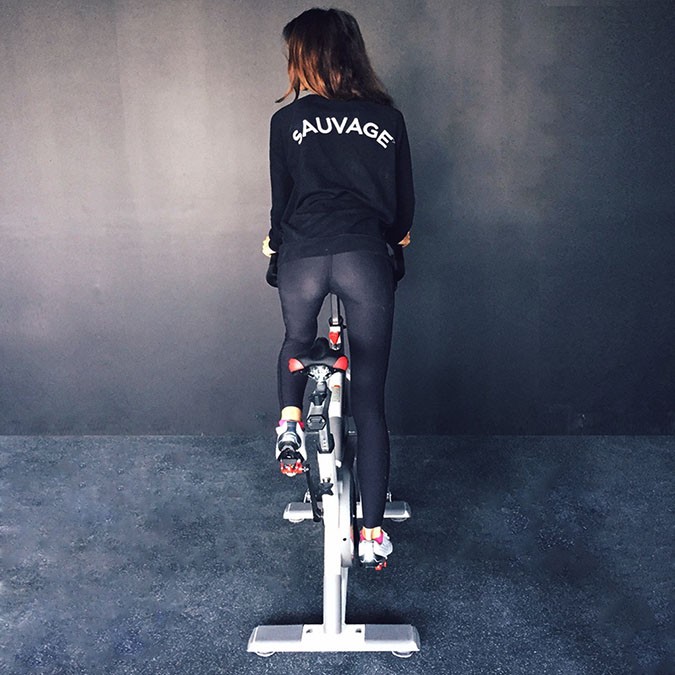 You can find out more about Motion Cycling by visiting their website here. Classes are priced at 120 AED per class, but money-saving packages are available. To get in touch, call +971526235127 or email [email protected]. You can also follow them on Facebook and Instagram.