Diary Of A Real Bride: A Surprise Helicopter Proposal In Dubai

Written by on November 30, 2017.
Tagged under: Diary Of A Real Bride: A Surprise Helicopter Proposal In Dubai, engagement in dubai, helicopter proposal

A Surprise Helicopter Proposal In Dubai

If you’ve been reading our real bride diaries of late, you’ll be aware that Amy and Michelle are fast approaching their respective weddings. Today, we have the pleasure of introducing you to our newest ‘real bride’, Maja Lunsjo, who will be updating you on her wedding planning progress every month.

Maja and her now-fiance Chris have lived in Dubai for a year, having been together for the past eight. Their wedding will take place at Al Qasr in just under a year’s time, on 16th November. We look forward to hearing all about Maja’s plans as the big day approaches!

Read on to find out about Maja’s surprise helicopter proposal in Dubai. Enjoy! 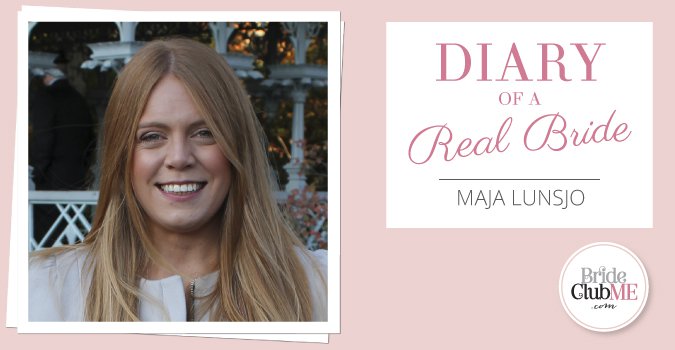 “You underestimate me!” He said.

“No offence, but I highly doubt it,” I replied.

Chris and I had been dating for 8 years now, after meeting in our local University pub back in England. We had survived 4 house moves, multiple monopoly nights and even a year of long distance whilst I studied in Hong Kong. We had moved to Dubai together a few months prior and I was certain that it was only a matter of time before he proposed. I was also convinced that I would be able to see it coming from miles away and that a surprise proposal simply wasn’t on the cards for me.

“I guess you’ll just have to wait and see.” He winked at me. “If I ever decide to propose, that is…”

A few months later, I was in the office when I received an email from Chris’s work account. “Morning! I said we would go to this, hope that’s ok?” It was a forwarded email from Chris’s boss inviting all the employees with partners to their annual summer party. The date was 23 June and the location was Atlantis. Details were to follow but it would be a full day event starting with team activities and followed by an awards ceremony.  “Sounds great” I replied.

During the weeks that followed, I met with some of the girls from Chris’s office for an occasional coffee. They were discussing what to wear to the event and raving about how good last years party had been. They explained that the day normally starts with speeches and formal mingling so wear something business-casual to start but bring beach stuff for later. I was excited.

On the morning of the 23rd Chris was unusually quiet but when I asked him if he was okay he explained that he was nervous about the awards as he was hoping for ‘Best New Starter’, so I didn’t think any more of it. The event invitation had said to meet at 9am at the helicopter centre close to Nasimi beach, from which the whole team would take a shuttle to the ‘secret event location’. I am a huge aviation geek so I had really been hoping that this meant we would be going on a helicopter (this was literally the top item on my bucket list) but both Chris and the girls from work had on numerous occasions explained that we definitely weren’t.

We arrived just before 9am and the lady greeting us said “Oh, are you here for the corporate event? You are an hour early”.
I could have sworn the invite said 9 but Chris checked his phone again and said, “She’s right, it says 10.”
“No problem, you can wait in our VIP room,” she said and escorted us through.

“What’s the point of meeting here if we’re not going on a helicopter?” I was sulking.
“How do I know, I didn’t plan it!” Chris replied.

A few minutes later the lady reappeared with a big smile and explained that they had received a last minute cancellation on their morning helicopter tour. It was starting in 15 minutes and they had 2 spare spaces which she was happy to offer us if we wanted them. The tour was only going to last 25 minutes so we would be back in time for the 10am shuttle to the company event. “We will take the seats!” I almost yelled at her. 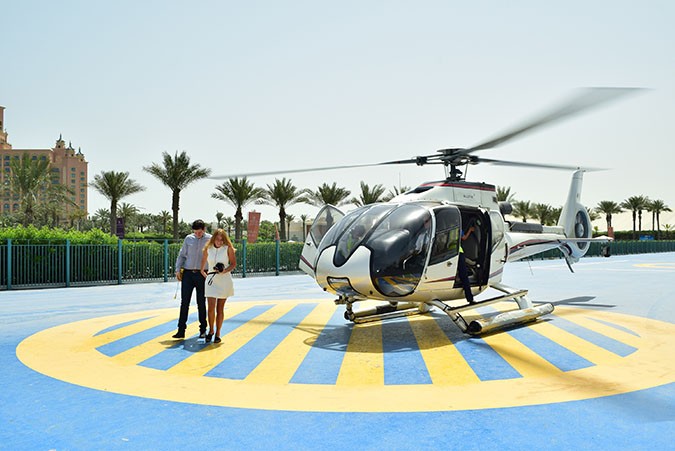 The next thing I knew we were walking (or in my case practically running) onto the landing platform towards the helicopter. I was halfway there when the lady called me back.

“Mam, we need to take your picture,” she said. “You can buy them when you land.”
Of course! I knew I’d probably have to pay a fortune for the photo afterwards but this wasn’t one of those silly novelty photos you get at Disney land, this was a helicopter! I wanted every photo I could possibly get. Chris put his hand around my waist and we smiled at the camera with the helicopter and Atlantis as our backdrop. I was still focusing on the camera when I noticed that Chris’s hand had come off my waist. I looked up at him and realised that he had turned to face me with a huge, cheeky smile on his face. He produced a little box from his pocket, and I knew instantly that he had proved me wrong. My heart almost exploded as got down on one knee, wiped a tear from his eye (he still claims it was sand), and asked me to marry him. Obviously, I said yes.

It was the best day I could ever have wished for. After Chris got back off his knee and the aircraft engineers had stopped cheering we took our seats in the front of the helicopter (which he had obviously booked in advance). We flew over all our favourite places in Dubai and I got to ask the pilot a million questions about the controls. Chris later explained that a helicopter proposal had always been the obvious choice because if I had said no chances are I wouldn’t have gotten to go on the fight. In his eyes, the helicopter was basically his insurance to guarantee himself a yes.

Needless to say, there was no office event that day (his entire team had played a part in the surprise). Instead, we headed to Al Qasr where he had booked us in for a beach/pool day, including lunch at Pai Thai. We loved Al Qasr so much that we eventually went on to book it as our wedding venue, but more about that later. 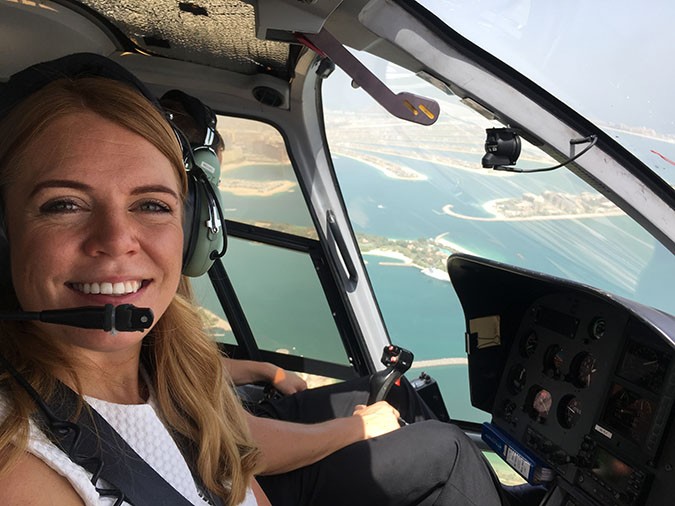 When we returned home around 6pm, Chris told me I had one hour to get ready because there was still one more surprise to come.

We arrived at the Burj Al Arab for dinner around 7.30pm. I was handed a long stem red rose on arrival. “This is from your fiancé,” the hostess said, and our dinner table was decorated with a heart made of rose petals. It was super cheesy, but I loved it. The meal was followed by a reservation at Skyview Bar, also in the Burj, where we were greeted with: “Your table is ready for you Mr Davies, and may I say, future Mrs Davies.”

I was beaming at Chris. Not only had he completely surprised me, he had managed to combine all of my favourite things to create the most romantic, cheesy and exciting day that I had ever had. It was perfect.